Orava Castle belongs to the most important monuments of castle architecture in Slovakia and stands as a landmark of Orava region.

Tours are not guided.

(available in all tours)

In order to protect it from any possible danger, owners and castellans of Orava Castle were continuously building and improving castle’s fortification system. Its present form is a result of a long process that started in the second half of the 13th century. One thing remains unchanged – there is only one entrance to the castle that also serves as an exit. This is why the fortification system is a part of every tour offered.

Castle’s fortification is formed by three castle gates with passages surrounded by walls and Southern Bastion. On the inner wall between the First Castle Gate and the Second Castle Gate, you may notice a so-called “pitch nose” – a gargoyle-like opening for pouring hot pitch, oil or water down on possible attackers.

The fortification system leads to the Main Courtyard. Rest of the castle can be entered from this point. The courtyard offers a view of the remaining castle buildings, including the Parsonage from which the great fire of 1800 started and destroyed the castle.

(available in all tours)

The multimedia exhibition “Peatlands of Orava” is located on the ground floor of the Parsonage on the Orava Castle’s Main Courtyard. The exhibition introduces the origin, evolution and importance of peatlands in two rooms, focusing on the most important locations and typical plant, animal and fungal species of the region. 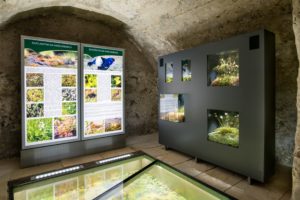 The Main Tour (A)

This tour includes exhibitions in the Lower, Middle and Upper Castle.

The Upper Castle – the Citadel

The core of today’s Citadel was built in the 13th century and is considered to be the oldest part of Orava Castle. As the highest object of the castle, it served as a military base, a storehouse and as a residential building. It was originally composed of several objects that were architecturally unified in the second half of the 16th century by Francis Thurzo. Not much is left from the original Citadel. Wooden parts were replaced by the stone ones and the supporting walls were heightened and strengthened, also while in the possession of Francis Thurzo.

The Small Tour (B)

This tour includes exhibitions in the Lower Castle.

The Lower Castle – The Treasury of Orava Castle

The Lower Castle – The Chapel of St. Michael

Originally consecrated as a Protestant castle chapel, the Chapel of St. Michael was built in 1611 after being adapted into older fortification objects. In 1751, the chapel was Catholicized and dedicated to Saint Michael. Its original Renaissance altar was transported to Necpaly and replaced by the present Catholic wooden one.

The chapel became an important place in the history of Thurzo family after several members of the Orava-Bytča branch were buried in the family crypt under the chapel floor.

Present Baroque organ from the 18th century was fully restored in 2013 and is still being used on several occasions.

The two floor palace from the turn of the 16th and 17th century is an architectural representation of the most important members of the Thurzo family – Francis Thurzo and his son George. The Armory and the Thurzo Salon are decorated with valuable Renaissance murals from the beginning of the 17th century. The atmosphere of the palace’s interiors is amplified by period furnishing, weaponry and models of historical garments.

Didn’t find what you were looking for? Contact us.